C is for Celestial Cow 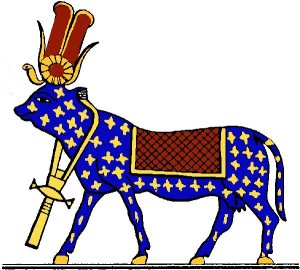 One of the most enduring symbols of Deity in the Ancient Egyptian cosmogony is that of a Bovine Goddess. From the earliest dynastic period and the Narmer Palette with the figure of the goddess Bat, believed to be a precursor to the popular HetHert – more commonly known as Hathor, the imagery of a celestial or divine cow has endured. Though Aset (Isis) and Hathor both are commonly shown with horns and a solar disk as part of their symbolism, only Hathor has bovine ears.

The Book of the Heavenly Cow, though some believe it originated during the Amarna period under Amunhotep IV (Akhenaten) more likely actually originated around the time of Amunhotep II, Akhenaten’s paternal great grandfather. This is most likely because of an illustration on the walls of his tomb which depicts the pharaoh suckling from the Great Divine Cow. the story is also depicted on the golden shrines that were found within the tomb of King Tutankhamun. Cows appearing in both the sky and in the Duat (Underworld) linked Hathor and Nut as being the one who bore the sun god, Ra, upon Her back. The story of the Celestial Cow appearing in the tomb has less to do with the magical transformation or protection of the King as the tale is probably meant a Creation tale. The Book of the Divine Cow or Celestial Cow ties directly to the mythos surrounding Sekhmet and the Destruction of Mankind.

I have talked a little about this in other blog posts. This story has direct correlations also, with the Flood of Noah in the Christian bible where Mankind, in its rebelliousness has turned their faces from Divine authority. In the Egyptian version, Mankind not only turned away, but in some versions, plotted to overthrow and kill the Netjeru (Gods). Ra asked the others what to do, and they asked Ra, Who was their King, to send His ‘Eye’. The Eye, in this tale, is HetHert (Hathor) and in Her rage, She transforms from Her more benign form of a beautiful woman with bovine ears into the lioness, Sekhmet.

Before all of this had transpired, there had been a golden age upon the earth where Mankind and the Netjeru had lived side by side under the rulership of Ra. In that golden age, there was no death, there was no real delineation between day and night where Ra traversed across the sky and then into the Underworld at night. He was always visible at all times. All of this was before the accidental creation of the Uncreated One [Apep ] or any knowledge or concept of isfet.

When Ra sought the counsel of the other deities, He asked them to tell him what to do, that he did not want to wipe humanity out, but rather to punish them. He asked Nu, who said, “Send forth Thine Eye (HetHert) to strike those who blaspheme you, for none may resist the Eye when it shines in the form of HetHert.”

When HetHert was summoned, She became very angry at those who would raise their hand against Ra, Her father. She transformed into Sekhmet and for a period of three days and three nights, she indiscriminately slew every human that she came upon; men, women and even children where She found them. Her slaughter began at Hensu (Herakleopolis Magna) and continued throughout the land. Ra was alarmed at the bloodshed and He implored Sekhmet / HetHert to stop her killing. She looked upon Her Father and flatly refused. By this time, the anger that She was feasting on had become a heady draught of its own. “As sure as You live for Me (By all that is holy),” She said, “so it is pleasing (a balm upon My heart) to have triumphed over them (Mankind).”

Ra was concerned that Sekhmet would slay all of humanity until there were none left. He needed a plan to stop Sekhmet / HetHert from destroying humans entirely. It was Djehuty (Thoth) who came up with the idea of taking red beer, spiking it with mandrake and colouring it with red ochre or hematite in order that it should resemble blood. He did this with the assistance of slave girls or priestesses of the Goddess. Vats and vats of this soporific liquid was poured out onto the land until it resembled a vast lake of blood placed directly in the path of the raging Goddess. Sekhmet came upon this lake of red beer and began to drink. She drank and drank until She became happy and forgot about why She was angry in the first place and was at last quelled, turning once again back into the beautiful (if not happily drunken) Hethert. From time immemorial during the feast that commemorated the pacifying of Sekhmet / Hathor, making the beer was entrusted to the priestesses or slave girls to make the intoxicating drink that was consumed.

Ra and the rest of the Gods were overjoyed that Sekhmet’s carnage had at last stopped. Ra cried out in joy at seeing HetHert again, “Welcome, welcome in peace, O’ Beautiful One!”

But at this point, Ra withdraws from the Earth, from Mankind, not as a form of punishment but rather because He realized that unleashing His rage, in the form of Sekhmet, He introduced to the world, the reality of death and destruction for the very first time. The Golden Age that knew Mankind and Gods to live as One in the same place upon the Earth is now over. Ra knows deep down that in order save humanity from the potential of His wrath, there needed to be distance between Hims and the creation (Humanity) that He loves.

The Eye of Ra, Who was a lioness, now being pacified has transformed back into a cow. This cow is called mehet-weret ‘Great Flood’ or “Great of Flood”, which is also equated with Nut, the starry sky at night as well as with HetHert. The ‘Great Flood’ was made of beer, rather than of water. The “flood” within Egyptian mythology ends up being Mankind’s salvation when it came, rather than that which was sent to cleanse the earth of humanity. Mehet Weret / Nut allows Her Father, Ra, to ride upon Her back into the sky and the Two begin to ascend.

In the myths that make up the Book of the Divine Cow, several times She (HetHert / Nut) becomes fearful of the heights to which She and Her Father, Ra, have risen. Her Father urges Her to continue to climb, encouraging Her along the way as They keep rising up higher and higher into the sky. At one point, She becomes so frightened that She cannot stand on Her own. Ra summons the sons of Shu, who are referred to as “the pillars that hold up the sky” and the four winds so that They can steady Nut by holding onto Her legs so that She will, shoring Her up so that She will not fall.

At last Ra and Nut and Their entire accompaniment reach Their lofty destination. The Cow, for Herself, becomes quite lonely for all that She and Ra have left behind Them. Ra reassures her by reminding Her that all over Her body are the stars that make up the nighttime sky. Her starry raiment serves as a sentimental glimpse and a memory of all of those good people and things that are now removed from the world by death that may seem now to be gone. They are, in fact, not gone at all, but are always there. Today, like many cultures, Kemetics look up at the starry night sky and see the millions upon millions of akhu or ancestors who are there. Like Ra, they are removed from us but not truly gone. There is a comfort to know that our akhu are never far away and they are between us and the Divine. They keep the Gods company and the serve as a go between to intercede on our behalf and vice versa.

I love the way that Rev. Tamara Siuda explained it that, “In creating the Celestial Cow, Ra has both made sure that She will never be lonely – and righted the wrong of killing people in the first place, by making sure that they can have another life after the lives they lost, and another chance at redemption.”

The takeaway from the lesson of the Celestial Cow is that no matter how bad things may seem, no matter how far from redemption things may appear, we are never alone. Even though it may feel as if we are facing a crisis or the world at large completely with no one to hear or to help, we have many things around us in terms of people, nature, the celestial sky and even our memories to keep us company. They are there to bolster us and back us up whenever the needs arise. The blinking stars in the sky at night are that reassurance that someone, in fact several someones are up there and are indeed listening.

Siuda, Tamara L. “Kemet Today: And There Were Stars: How a time out turned into a nighttime sky”

3 responses to “C is for Celestial Cow”