A is for Ankh 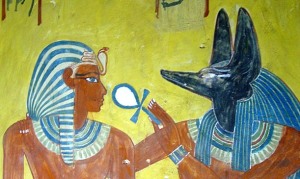 The ankh is one of the most widely recognized religious symbols in the world. Ask anyone what the ankh means, and invariably, the words, “eternal life” will be the definition that is offered even by laypersons.

In terms of the hieroglyphic catalogue or sign list that was put together by Sir Alan Gardiner, lists the ankh as Gardiner sign S 34. Scholars have speculated that it can either represent something as simple as a sandal strap, or as complex as an elaborate bow or knot that carried specific religious significance. The profusion if its use in iconography throughout Egyptian culture and that it is held by numerous ancient Egyptian deities in their various depictions underscores the meaning ascribed to the ankh – the meaning is life. Even those who could not read or wriite, and in Ancient Kemet, the literacy rate among its people was something like 2% or 3%, the meaning of the ankh was known. It was commonly found as a potter’s mark on vessels throughout the history of Egypt. (Shaw)

Even today, we often hear the ankh referred to as the Key of Life. More than this, it stands for several life-sustaining things. In some reliefs, ankhs are seen pouring out, to symbolize water and in turn purification. Other reliefs show the sustenance in the form of food or flower offerings which were referred to as ankhu. Most often, however, it is shown to represent the breath of life. Often statuary, paintings or reliefs will show a King, a Queen or other member of the noble class being presented with an ankh that is held beneath their nose by the god or goddess. 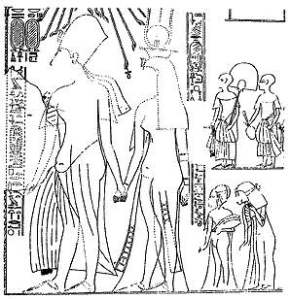 From the Tomb of Huya, Amarna Period, Courtesy of Wikimedia Commons

During the reign of the Heretic Pharaoh, Amunhotep IV, otherwise known as Akhenaten, reliefs of the Aten disk can be seen with streams that form long arms and hands that offer ankhs to the Akhenaten, Nefertiti and their children. During this period, the literal disk of the sun, or the Aten is what gave life to the Two Lands.

Mirror case from the tomb of Tutankhamun

Most everyone also knows that the word ankh can also mean mirror and often mirrors in ancient Egypt were made in the shape of an ankh.

The idea that a Temple was called a Per Ankh or ‘House of Life’ did not just mean simply it was a place of worship, but also learning how to live, via the Netjeru and that Rameses IV claimed that he had studied the papyri at the House of Life to learn the secrets of the gods. Living one’s life is an active thing and so we can only surmise that the training that the King underwent was experiential and the secrets he learned were not just intellectual in nature. (Naydler)

The ankh survives today, not just among Kemetics and Pagans who incorporate the symbol into their personal practices, but even after the fall of Ancient Egypt to Roman Rule and Roman Paganism, the natives of Egypt among the first to convert to Christianity, but the ankh survives in the form of the crux ansata, ansate, looped, or handle-shaped cross in the Coptic Church.

8 responses to “A is for Ankh”