B is for Bennu Bird

“I am that Great Phoenix which is in Iunu/Heliopolis
I am the one who assigns what exists.
What does it mean?
It is Eternity and Perpetuity
As for Eternity (cyclical time), it is the Day
As for Perpetuity (linear time), it is the Night” – (from Spell XVII, “Prt Em Hrw” the “Book of Coming Forth by Day” or “Ancient Egyptian Book of the Dead”, R.O. Faulkner Translation)

The Bennu Bird is the predecessor of the Phoenix of Greek mythology. This symbolic representative of Creation is tied to the word weben, which means ‘To Rise’. The Bennu or Benu Bird is tied to the gods Atum, Ra and Wasir (Osiris); which would explain this deity being featured wearing an Atef Crown. The Bennu bird ties to the Benben stone which also resided in Heliopolis. Atum, according to legend rose up as the Benben in the Mansion of Benu in Heliopolis. The Benben Stone itself was believed to be constructed of and representative of the solidified semen of Ra-Atum as the Soul of Ra when He copulated with His own hand to Create the rest of the known Universe. Later the Hand was attributed to various goddesses in the Ancient Egyptian pantheon and in the person of the Queen or Hm.t Niswt of the Pharaoh. 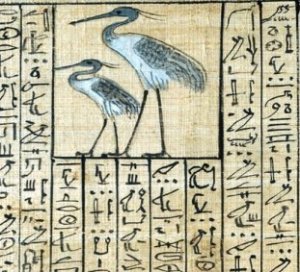 The Bennu, according to the Metternich Stele, created itself from a fire that burned on the sacred Persea Tree located at Heliopils. It was believed that the Bennu bird would build His nest of twigs made of incense, more specifically, myrrh (Commiphora myrrha) in the Persea tree and die. In Heliopolis, it was also believed that the sun rose of the Bennu to illumine the sky and died five hundred years, the Bennu Bird would fly into Egypt from Arabia, carrying in His beak an egg composed of myrrh , representative of His Father’s body. It is this egg, of the Great Cackler, Geb, that is left on the Primordial Mound. It is on this Mound that the sun, Ra is again reborn.

One of the earliest appearances of the Bennu Bird is in the Pyramid Texts of Unas as a yellow wagtail and then later, in the Book of the Dead, the bird seemed to have changed shape into that of a Gray Heron (Ardea cinera) . These birds are quite prolific here in the Wapsipinicon River Valley and every time I see one in flight or pausing looking for food in the many waterways and tributaries in our forests, it serves as a breathtaking reminder of the Benu bird.

The Bennu Kite that hangs in Userbenu’s room.

Perhaps on an unconscious level when we moved our family from the city out to the wilds when my son was all of six years old, it was the draw of the Great Bennu. It was the Bennu who became a part of my son’s Kemetic name of Userbenu, or the Strength of the Phoenix. No parent wants to consider that their child will experience difficulty, but my son latched onto the imagery of the Phoenix almost as soon as he became aware of it. To this day, a a giant hand-painted kite that we found at New Pioneer Natural Foods Co-op almost 20-odd years ago, hangs on the ceiling of his room. It has, I think served as a reminder for him and for the rest of us the important image of the Bennu Bird.

Such powerful imagery is important for us as humans, even when we are kids. There are few books that really are tailored toward Pagan, or especially Kemetic parents and their children. One of the best books that I have ever seen on the market, and one that I bought for my own son and hope to hand down to any future grandchildren is The Cry of the Benu Bird by C. Shana Greger tells the story of Atum and the Benu Bird in a delightful way. Of course, it does not go into much of the aforementioned more erotic aspects of that Creation Myth, but it does talk about the Creation of the other Netjeru in a way that children can appreciate and understand. It’s beautifully illustrated and gets young minds thinking about the Netjeru and their potential relationship with Them and the rest of the world.

Normandi Ellis put the idea of our eternal rising from the ashes of those parts of lives at every stage. like the Bennu Bird, so beautifully. Her translation of the Ancient Egyptian Book of the Dead has often served as a poignant reminder for us and for those whom we love.

I have entered fire, I become invisible; yet I breathe in the flow of sun, in the eyes of children, in the light that animates the white cliffs at dawn. I am the god in the world in everything, even in darkness. If you have not seen me there, you have not looked. I am the fire that burns in you. To live is to die a thousand deaths, but there is only one fire, one eternity.”
Resources: – Normandi Ellis, Awakening Osiris

This idea of a Self-Created One, is central to Kemetic Religion. The Bennu Bird and the Phoenix have proven to be a powerful symbol or representation of the Divine for many throughout history. and Pagans and Kemetics today. We are each of us born, we live our lives, and we die. But in that life that each of leads there are series of births, lives, deaths and rebirths. None of us has been the same person we were when we started out or even a few years or even months or weeks ago. This is true not only of our personal lives, but our work lives and spiritual lives as well.

Subtly, we understand the process of cycles, of becoming of being and final release. We also, most of us, have various ideas about what comes next, what comes after. Though we may never see too far down the road, we always have that sense of inner knowing, of the cycles always continuing until we, like the Bennu bird, can be reborn once more.

3 responses to “B is for Bennu Bird”