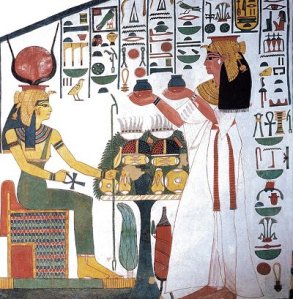 Nefertari offering to Hathor, from the tomb of Nefertari, Valley of the Queens

So often we hear of giving an adequate sacrifice to our gods. Certainly, some pagans, do manage to generously give either to their respective religious organizations or favourite charities, but there is that bit of offerings and giving that we all tend to do privately.

Recently there was a bit of a flap concerning some very ill-considered commentary about what is adequate or enough in terms of offerings made toward deities. Certainly there are cultural considerations that should be taken into account, depending on what Gods you are worshiping. In the case of some specific gods, to partake of the things that you offer to Deity is considered ‘stealing’. While in the case of ancient Egyptian or Kemetic gods, partaking of the offerings after the reversion is said over them is considered customary and proper. To waste food or to not share it with the greater community is considered to be the height of foolishness. If the gods give us their bounty, what better way to exemplify this than to communally spread the wealth and feed those who are assembled in celebration?

It is an unfortunate fact that I have heard time and again about how what is being offered is not considered “appropriate” or “good enough” for deity. Neither poverty nor ability to give more can be considered an adequate excuse. If you are not giving a juice box, to cite one of the examples, poured out as a libation to the gods, then by golly, you are doing it wrong. Others underscore the idea that somehow our focus and insistence on doing it right gives license for some to cop a sense of arrogant exclusivity and a holier-than-thou haughtiness that is neither attractive nor impressive to many of us who have been at this for any length of time.

The reality is that we live in an era that has a real disparity between those who have and those who don’t. Folks who are struggling are worried about whether or not they are going to make it. They live paycheck to paycheck, praying to whatever powers that be that their jobs are not outsourced, or that the unemployment might be extended just a little longer. They fret over whether or not the government is going to give them just enough of a subsidy to feed themselves and/or their families. Offerings to the deities that we worship are a nice idea, but it is little comfort to the mother who knows how damn much those juice boxes or other foodstuffs cost in the greater scheme of things. The idea of letting a child go hungry or thirsty while that asset is offered up to heaven not to be partaken of by the living is a luxury that some just cannot afford. The arrogant ones self-righteously raise their noses higher in the air and sniff disdainfully, “Well, if you can’t afford it, then don’t even bother!”

Where I come from, something so small as cool water, or oil for the limbs, a bit of honey, or a song or a piece of artwork made by our own hands given into the service of Netjer is something that is considered ‘enough’. To devote what one has and what can do out of a giving heart is worth more than expensive works or products lain at the altar. In Luke 20:45-21:4, Jesus warns about teachers of the law, those who would focus on the smallest Nth degree that everything is done according to the law. The Pharisees would pray loudly in the streets and make sure that all witnessed their pious giving and yet a woman who was a widow gave but two copper coins – which was probably the major portion of what she had to live on, gave them at the altar. Back in those days, it was the least in terms of the legal limit that could be offered at the Temple. Jesus noted to his disciples that the rich gave from their vast wealth and did not feel the true spirit of the gift, whereas the woman gave all that she had.

There are those within the pagan community whom others look to as being the arbiters of wisdom and how to do things properly when in service to the gods. Some of them might even have a series of letters after their name that denote impressive degrees that show that they had the money and the time to go back to school. For some within the Pagan community, that may make them bigger and badder than the rest of we who are garden variety devotees and worshipers. (I personally think that is a load of it, but hey, what do I know?)

The undeniable truth is this: We all feel a call and a pull to the Divine, but sometimes we have to be very careful about whom we turn to for advice when it comes to the sincere practices of performing acts of faith. Some, no matter how many letters after their names or tenured positions that guarantee a regular paycheck whilst they sit in the hallowed halls of academia, are full of themselves – and other more ‘fragrant’ substances that sticks to the bottom of shoes. Just because they have an M and an A or a P, an h, and a D after their name doesn’t mean that their offerings will be better received than those of the person who has put their heart and soul into a piece of handiwork – or had just under a dollar to buy a purified bottle of water to offer to their Deity of choice. For those of us who worship gods that were native to lands located in deserts, water was and is still considered a precious sacrifice because there was so very little of it.

The Pagan community in some places tends to be both cliquish and competitive, if not downright cruel at times. It seems as if some make it a point to look over the shoulders of others, to check and see if the offerings made, the devotions said and the form of worship rendered is somehow ‘good enough’. They take great pains to make sure that people not only are doing it well enough according to their standards, but will discuss it loudly across every form of social media available. Certainly such behaviour is not unlike that of the Pharisees who want you to know how very pious, generous and correct they are and how everyone else should be paying attention to how they are doing it.

The Ones who are paying attention, however, are the Ones before whose altars, shrines and temple spaces we lay the offerings before. Those are the Ones we are doing it all for anyway – and maybe a little bi for ourselves, too. That, I believe, should always be considered ‘enough’. It’s that idea along with the inner knowing that we are all enough, that we love enough and that the Divine can and does understand our circumstances and does not judge us for it in ways that others and even we each have a tendency to do. It is this idea which we should be paying attention and listening to rather than the talking heads, of which there seems to be ever an overabundance of.